AMES, Iowa – June 18, 2017 – As part of the ongoing effort to raise awareness of pollinator habitat and preservation, the Monarch Highway is proud to launch its new logo during National Pollinator Week June 18-25, 2017.

Iowa is among six state transportation departments and the Federal Highway Administration that signed a memorandum of understanding in 2016 designed to improve pollinator habitat along Interstate 35, a key migratory corridor for monarch butterflies. Signatories include the Federal Highway Administration and senior executives from Iowa, Kansas, Minnesota, Missouri, Oklahoma, and Texas to informally designate the 1,500-mile I-35 corridor as the “Monarch Highway.” This partnership demonstrates a broad commitment from state agencies, the federal government and nonprofits, including the National Wildlife Federation, toward protecting the monarch butterfly and other pollinators. 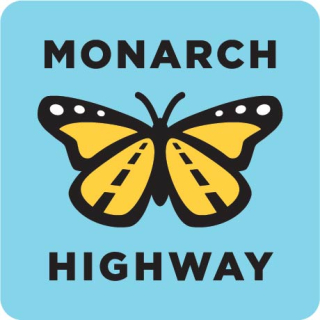 The new logo represents the interaction of the monarch and the Interstate Highway System. The blue backdrop signifies the miles butterflies travel to reproduce in northern climates, while the yellow demonstrates the insect’s migration along the Monarch Highway corridor. The white dotted-lines represent lane markers guiding the monarch home.

Last year, the I-35 corridor was identified as a route on which land along the interstate could be developed to increase plants that provide refuge, breeding habitat, and food for monarch butterflies and other critically important pollinating insects.

"With the return of native prairie plants to Iowa’s roadsides, acres of habitat ideal for pollinators have been created, but that’s only a small portion needed for pollinator recovery," said Lowe. "It’s important to build awareness and education about pollinator needs along the I-35 corridor to ensure monarch butterflies and other pollinators can flourish.”

The Iowa Living Roadway Trust fund has commissioned a series of pollinator posters. You can download a PDF version the posters or order paper copies free of charge at https://www.iowadot.gov/lrtf/home.

Monarch butterflies born in late summer or early fall migrate south to winter in Mexico. In the spring, the butterflies return to the southern United States and lay eggs. Successive generations of monarchs continue moving north, which takes them along the I-35 corridor and finally into the northern United States and Canada. These monarchs begin the cycle over again by completing the 1,500-mile trek back to Mexico.